So, you know how fuck Boston?

This Sunday, the New England Patriots will play for the Superbowl and if they win, it will be their 6th title since 2002. The Brady-Belichick era has been the most dominant in NFL history. Annoyingly, other Boston teams have also been successful in this period (heretofore referred to as the Fuck Boston Era): The Red Sox won the World Series in 2004, 2007, and 2013, the Celtics won the NBA Championship in 2008, and the Bruins won the Stanley Cup in 2011. Fuck Boston!

In the last 16 years, they've won 10 championships in all four major North American sports. And in two days, it might be 11. Fuck Boston.

*this is the part where I mention that I've been to Boston twice and have had a lovely experience both times.

But it got me wondering: fuck Boston, yes, but fuck Boston just how much compared to fuck other cities, historically?

Sorry. In plain English: are there any other eras in which one city dominated the sports landscape as thoroughly as Boston has in recent memory, with both the volume and variety of championships?

To measure this, a new statistic is introduced:

The Functional Utility Calculation for Knowing, Based On Statistics, the Temporal dOminance Number (FUCKBOSTON), calculated as:

So, has any other city dominated an era of North American sports like Boston has the current era? 5-year, 10-year, 15-year, and 20-year FUCKBOSTONs were calculated for all possible such eras, going back to 1903. Results are listed below. 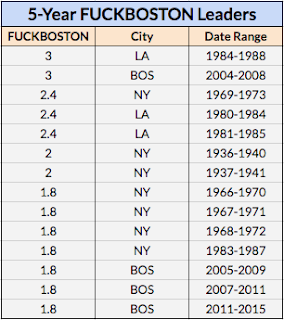 80s-era LA coming in hot! Los Angeles teams between 1984 and 1988 won three NBA championships (Lakers), a World Series title (Dodgers), and a Superbowl (Raiders), for a dominant five-year stretch that nonetheless only ties them with the Fuck Boston Era Boston teams. Fuck LA!

Sports fans can look back at past championship statistics and marvel at the dominant teams of bygone eras (hello, '60s Celtics), but it's impossible to get the visceral jealous hatred towards a city as a whole that goes with living through the era. As a millennial (yes, fuck me, I know), even though I knew the Lakers were great in the '80s, and I've seen the other LA titles listed as statistics, I never really thought of '80s LA as being a dominant sports city in the way Boston is now. But looking at the FUCKBOSTON numbers, sports fans at the time must have similarly despised LA, especially since LA fans are the worst. Fuck LA! 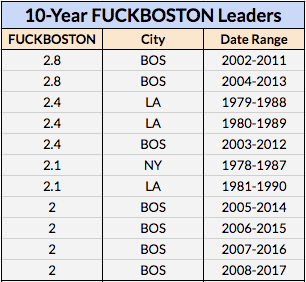 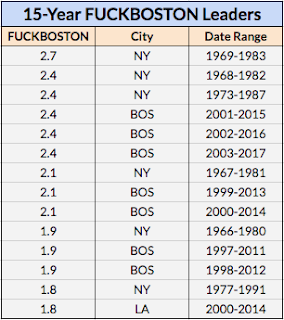 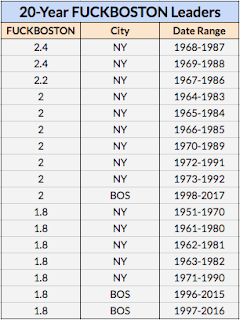 For 20 year stretches, New York completely dominates.  Most of the top 10 are variations on the aforementioned late 60s-early 80s NY teams, with the only exception being one version of the Fuck Bostons.

For all possible lengths of era, Boston, LA, and New York completely dominate the leaderboards. The first non-Big-Three cities for each table, ignoring some ties because I'm lazy, are:

Obviously, this statistic only captures information about championships, and does not in any way attempt to measure the qualitative ways in which fuck Boston. Were we to include some sort of multiplier to account for qualitative parameters, Boston would obviously run away with all possible mutations of FUCKBOSTON. An initial draft of such a multiplier would look something like this:

Wondering where your city ranks? How the Big Three's scores have evolved over time? Looking for more reasons to hate Boston? Stay tuned to Bottom of the Fourth for follow-up analysis in the coming weeks.