Today's graph reveals a previously-unknown relationship between a player's batting average on balls in play (BABIP) and their diet. Based on a sample of 20 Major Leaguers, it appears that BABIP increases linearly as a player incorporates a higher percentage of vegetarian food into their diet.

The cause for this correlation, if one exists, has not yet been confirmed, though Bottom of the Fourth scientists are currently working on the theory that meat carries a special BABIP-dampening hormone known as Molinagen.

The only outlier in this data set is Bengie Molina, who has gone 100% vegetarian, reportedly in an effort to lose weight (though it's possible he had a jump on this research and is trying to improve his production), but is still a laggard in terms of BABIP. 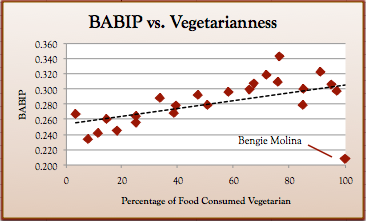