On Wednesday, July 14, Bastille Day, the Toronto Blue Jays destroyed their franchise.
Allow me to explain. The Jays traded their starting shortstop Alex Gonzalez, along with prospects Tim Collins and Tyler Pastornicky, to the Atlanta Braves for Cuban shortstop Yunel Escobar and pitcher Jo-Jo Reyes. On the surface, it looks like a good move by the Jays; they cashed in an aging rental player and a couple of B-prospects for a young player with a solid track record at a key defensive position. However, Escobar had fallen out of favour with the Braves because of his attitude and abrasive personality, and this factor will prove to be the undoing of Canada's only major league baseball team.
There's no doubt that Yunel Escobar is a clubhouse cancer. Just look at these testimonials:

"He's been known for perceived arrogant mannerisms on the field and has carried a me-against-the-world mentality" - Alden Gonzalez, MLB.com

"There's no doubt that Escobar's flamboyant approach to the game has continued to infuriate some members of the Braves organization" - Mark Bowman and Chris Hempson, MLB.com

"It's about the attitude and being a clubhouse cancer." - PrinceWimbley

"not an Atlanta Braves type of player" - a veteran Braves scout

"The guy is a clubhouse cancer." - kalmamd, forum.bodybuilding.com

And if that weren't enough, picture those quotes in a rapid-fire video montage set to a foreboding yet driving soundtrack which crescendos as the lengths of the clips shorten, climaxing as the words Clubhouse Cancer are fiercely spoken directly into the camera, and hollowly fades out while the text rattles around the deteriorating, congealing images.
Yeah, I know. Powerful. 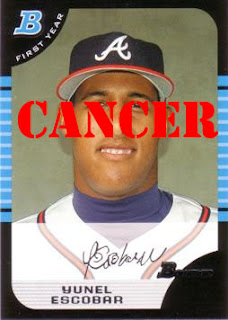 And thoroughly convincing. How can you not believe the guy is nothing short of a ticking time-bomb when so many individual opinions support that claim?
According to Wikipedia, cancer is a "a class of diseases in which a group of cells display uncontrolled growth (division beyond the normal limits), invasion (intrusion on and destruction of adjacent tissues), and sometimes metastasis (spread to other locations in the body via lymph or blood)."
I'm sure I don't need to spell it out for you, but this is not a good thing. Let's follow the cancer analogy to its logical conclusion by examining what its three properties mean for the Toronto Blue Jays.

The Blue Jays may see immediate gains from this trade, since of the two major league shortstops moved, Escobar is younger, cheaper, and projected by most as the better player. But it's a short-term move by the Jays, and it's never a good idea for a major league franchise to turn a blind eye to the future. The Atlanta Braves, on the other hand, avoided that temptation, and chose to build for years to come by ridding themselves of a liability that likely would have ensured the destruction of their entire franchise.
Instead, that will be a fate only suffered by Toronto.
Posted by Xave at 9:10 PM